TERRIER (Temporally Extended, Regular, Reproducible International Event Records) BETA is a new machine coded event dataset produced from a historical corpus ranging from 1979 to 2016, available for download at OSF. Event data generates structured records of political events described in text in the form of (1) a source actor (2) committing an action (3) against a target. The political events recorded in the dataset include a wide range of political behaviors: meetings, statements, provision of aid, protests, attacks, and violence. This dataset is an initial beta release of the data, lacking event geolocation. We encourage researchers to carefully check the data they use and to contact our team with any issues they uncover regarding the data by opening a thread on our discussion forum.

The dataset was produced by a team at the University of Oklahoma as part of the National Science Foundation RIDIR grant “Modernizing Political Event Data” SBE-SMA-1539302. This work used the Extreme Science and Engineering Discovery Environment (XSEDE) JetStream at the Texas Advanced Computing Center and Indiana University through allocation TG-SES180003. The Extreme Science and Engineering Discovery Environment (XSEDE) is supported by National Science Foundation grant number ACI-1548562. Any opinions, findings, and conclusions or recommendations expressed in this material are those of the authors and do not necessarily reflect the views of NSF or the U.S. government.

We have also produced a set of resources for Arabic event data. We’ve produced a large set of gold standard records of protests and attacks in text, as well as the spans associated with the actors for each. Those records are available on Github. We’ve also produced Arabic language CAMEO-style dictionaries, which can be used to map actors’ names and event text onto CAMEO categories.

Note: we are not affilied with the Terrier information retrieval group at the University of Glasgow. Check out the excellent work they do on their homepage.

What is event data?

Event data, at its most basic, consists of a “triple” of information: an event, such as a protest or attack, performed by a source actor against a target. These events and actors are automatically recognized in text, extracted, and resolved to a defined set of codes, such that “demonstrated” and “rallied in the streets” would both be coded as a “Protest” event and “Angela Merkel” and “German Ministry of Defense” would both be represented as DEU GOV. Performing this process on many millions of documents produces a set of structured data that is much easier to analyze than the raw documents.

In producing event data, we build on the dominant paradigm of event coding in English, which consists of automatically comparing grammatically parsed sentence text with hand-defined dictionaries using an event coding tool. The tool follows instructions about how to combine the extracted noun- and verb phrases into a direct event with a source and target, and resolves the extracted text to specified set codes defined in an ontology. An automated event coding system thus consists of two components: a set of dictionaries that map noun and verb phrases to their corresponding actor and event codes in an ontology, and an event coder that applies these dictionaries to the text and makes decisions about how to combine individual actors and actions into coded events.

The ontology we use is the CAMEO ontology, which is the current standard coding ontology for most event data. CAMEO enforces a requirement for a source actor and target actor to go along with each event. Actors and events are each assigned hierarchical codes. Actor codes begin with high-level information comprising their country or international status, following by a functional role code, such as “GOV” or “MIL”, with secondary codes providing greater detail in some cases. Event codes can be aggregated into five top level classes, 20 intermediate event types, or around 200 low-level codes. Each code is documented in the codebook, available here.

For more details on how we created the Terrier event dataset, see our technical overview.

The Terrier dataset was generated from roughly 200 million news stories from 500 news sources around the world, ranging in dates from 1979 into 2016. The raw text of each story was obtained from LexisNexis either though special API access and later through bulk dumps provided by LexisNexis on mailed hard disks. From these news articles, we produced around 60 million events.

The number of events produced per month (below) shows a marked increase over time, as more source text becomes available and as dictionary coverage improves. This exponential increase is familiar from other event datasets and poses challenges for researchers making over-time claims. Importantly, however, it shows no major missing time periods. 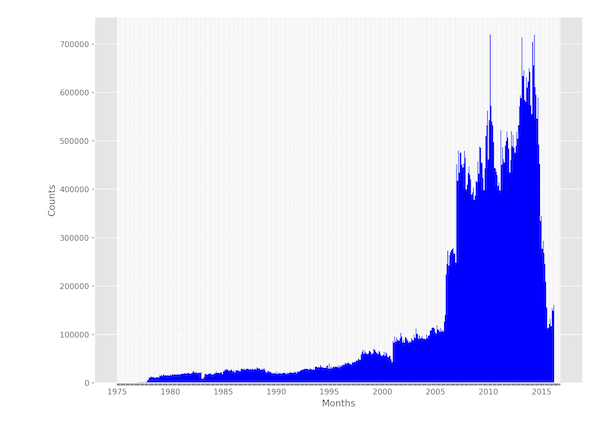 The events in TERRIER have initial geolocation information attached to them. The geolocation process arbitrarily selects a location extracted by CLIFF-CLAVIN from the sentence to the event in question. As with many maps, a high-level plot of geolocated events reveals good coverage of the world’s population density. 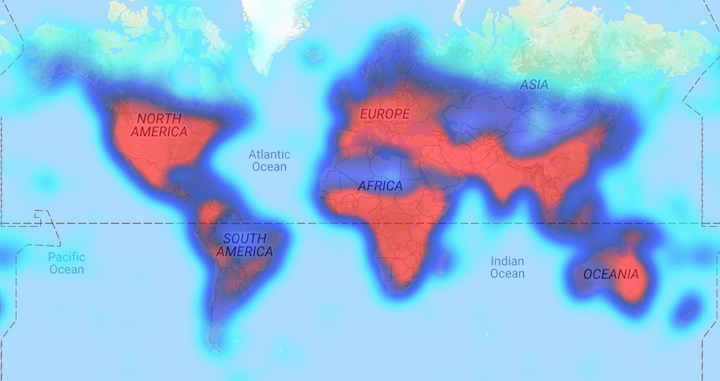 The data available on OSF comes in two formats: JSON and CSV. The JSON data includes field names for each entry, and the TSV does not. These are the fields available for each event, presented in the order they occur within the TSV files. For more details on what the different codes represent, please consult the CAMEO manual.

The English language sources used in TERRIER include LexisNexis’ complete collection of articles published by the following sources between 1979 and early 2016. (Note that LexisNexis does not possess many articles for these sources in the 1980s and 1990s).

Producing event data requires passing text through a series of tools to grammatically parse sentences, recognize events, and record them in a structured format. This process depends on recognizing actors, events, and targets in text and comparing them to hand-built dictionaries to produce standardized actor and event codes. TERRIER was produced with several open source tools and tools produced and maintained by the Open Event Data Alliance.

The first step in producing event data is to annotate the text with grammatical markup to provide information about the structure of sentences and the syntactic relationships between different parts of the sentence. The step automatically identifies noun- and verb phrases and the relationships between them, making it easier to determine who the actors are and what events are occurring.

To perform this step, we draw on the large body of work conducted in computational linguistics and natural language processing over the past two decades. Specifically, we use Stanford University’s CoreNLP to provide provide a constituency parse of each document.

Because of the size of our corpus (~2TB, 300 million stories), running CoreNLP was not a trivial task. We developed a distributed task-queue tool for distributing CoreNLP jobs across a cluster of machines to speed processing.1 Our tool, biryani, uses a Kalman filter to dynamically adjust the batch size and thread count in processing. More details are available in an article here.

The second major step in producing event data is to recognize political events in text, which words in the sentence correspond with actors, targets, and events, and which codes to assign to each actor or event.

Once CoreNLP generates grammatical information on the document, we are left with the task of determining which noun phrases correspond to our “source” and “target” actors, and which verb phrases could be events. In addition to finding these spans of text, we also want to resolve them to predefined categories to make them easily analyzable for social science research.

The heart of our event data pipeline is Petrarch2, which locates actors, events, and targets in text, compares them to dictionaries that map short phrases to actor- and event codes, and returns a complete event. Petrarch2 is a well known workhorse in automated event data. It is available for download here and is described in a white paper here.

We produced a new pipeline to run Petrarch2 at scale over many millions of documents. Although Petrarch2 is quite fast, it is natively parallel and also requires slower pre- and post-processing steps, including geolocation and final formatting. To bundle all of these steps together, we created Birdcage, a distributed pipeline that can quickly generate event data from CoreNLP-processed text.

The final dataset is available for download from OSF.

As part of producing the TERRIER event dataset, the event data team at the University of Oklahoma has produced a set of tools and reported our work in several publications. These efforts were funded in full or in part by the National Science Foundation under award number SBE-SMA-1539302.

Extract placenames from text and resolve them to their geographic coordinates.

An updated and improved version of Petrarch2, with full Python3 support.

Produce event data from processed text, parallelized across cores or across a cluster.